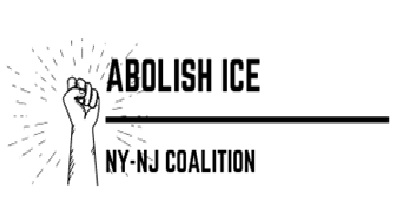 HACKENSACK, NJ — On Monday June 7th, 2021 at 7pm, the community will hold an overnight vigil outside Bergen County Jail for Marvin Jerezano Peña, a resident of Red Bank who is at imminent risk for deportation after being targeted and entrapped by ICE, in collusion with the Red Bank, New Jersey court system.
Mr. Peña was taken away from his 2 year old son, 18 months ago, and has been held in ICE detention since December 2019. A former DACA recipient, Mr. Peña immigrated to the US from Mexico as a child, and was captured by ICE, as an adult, as he left the court, after an appearance in which he was dismissed from probation.
Originally charged for possession of cannabis, now legal in the state of New Jersey, his arrest is another example of how the War on Drugs disproportionately targets Black, Brown, Indigenous, and working class folks fleeing the violence of US imperialism in their home countries. Once the judge dismissed him, he was grabbed by ICE outside the court. This is consistent with patterns of collusion between the New Jersey court systems and ICE, even after many facilities in the state made superficial announcements that they would be phasing out collaboration with ICE.
Earlier this year, he was wrongfully punished and put in the disciplinary unit because a guard had not followed proper search protocols. This abuse at the hands of the guards is nothing new at Bergen County Jail, which is notorious for the inhumane living conditions and for the month-long hunger strike of November 2020. Mr. Peña’s mother, Nohemy [add last name], is also suffering the deportation of her husband a month ago. We cannot allow ICE to take her son.
Marvin Jerezano Peña is not a priority for deportation, he is not a threat to the community, and he is not a flight risk. Mr. Peña deserves to live a free life with his family. He is his son and sister’s sole provider, he financially supports his mother with bills and must be released immediately. He cannot be deported, as this will plunge his family into further hardship. We demand Marvin’s freedom and the freedom of all other folks detained by ICE at Bergen, Essex, and Hudson facilities.
Show solidarity with Marvin and attend the overnight vigil, in which his family will share words.