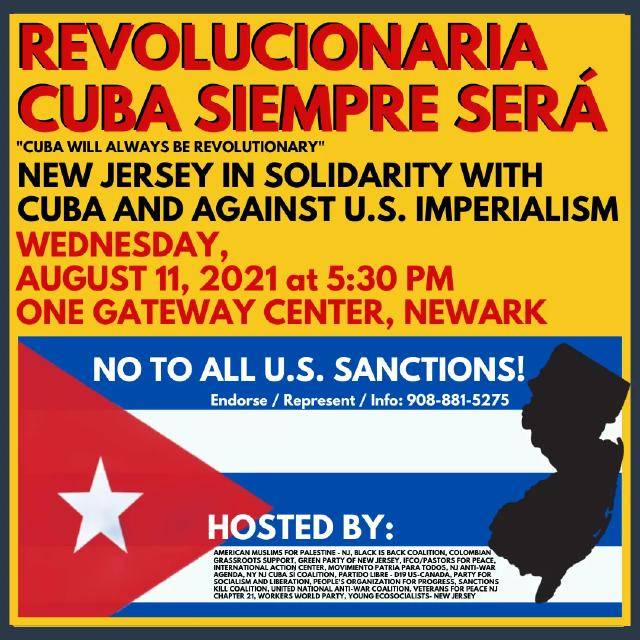 Wednesday, Aug. 11, 5:30 pm,
One Gateway, Newark NJ (Next to NY PATH at Penn Station, Newark)
FOR IMMEDIATE RELEASE
August 10, 2021
For more information contact:
Bob Witanek, NJ AntiWar Agenda: (908) 881-5275
Sarah Flounders, International Action Center: (201)388-7428
Madelyn Hoffman, Green Party of NJ: (973)876-1023
Lisa Davis, Black is Back Coalition: (973)517-1405
Matthew J. Skolar, Young Ecosocialists, 908-666-3857
Expression of Solidarity:
Against the Blockade and Sanctions of Cuba and around the world
We stand with the people of Cuba . . .
And Palestine, Haiti, Colombia, Korea, Venezuela, Yemen and other targeted nations
A coalition of organizations will hold a protest and “An Expression of Solidarity” on Wednesday, August 11th, at 5:30pm at One Gateway Plaza, Newark, New Jersey. (Next to NY PATH at Penn Station, Newark)
This event is part of a monthly series where NJ supporters of peace and opponents of war and imperialism unite at the US Senate offices of Booker and Menendez – 2 Senators who regularly vote for U.S militarism, starvation sanctions and war.
This next event will highlight support for the Cuban nation and people in their efforts to stave off growing hostilities including the illegal and murderous blockade, covert and overt actions and threat of possible military action by the US and or its military partners.
A statement released by the coalition reads, in part:
“WE DEMAND AN END TO THE U.S. BLOCKADES, SANCTIONS AND REGIME CHANGE MILITARY OPERATIONS IN CUBA AND THROUGHOUT THE REST OF THE WORLD!!”
Furthermore, we condemn the hypocrisy of the resolution that Senators Menendez and Booker supported, stating that they support the demonstrations in Cuba following “months of severe shortages of food and basic medicine, frequent power out-ages, record high rates of transmission of COVID–19, and the Cuban regime’s ineffective response . . . .”, while at the same time they both support the crippling 60 year embargo against the Cuban nation, which is recognized internationally as an economic act of war.  Even the UN, for the last 39 years, including 2021, has called for an end to the embargo.
Co-sponsoring organizations include: American Muslims for Palestine, NJ Chapter, Black is Back Coalition, Colombian Grassroots Support, Green Party of NJ, IFCO / Pastors for Peace, International Action Center, Movimiento Patria Para Todos (MPT,) #NJAntiWarAgenda, NY/ NJ Cuba Si Coalition, Partido Libre D19 US / Canada, Party for Socialism and Liberation, Peoples’ Organization for Progress, Sanctions Kill Coalition, Young Ecosocialists of NJ, United National Anti-War Coalition- UNAC, Veterans for Peace, NJ Chapter 21, Workers World Party