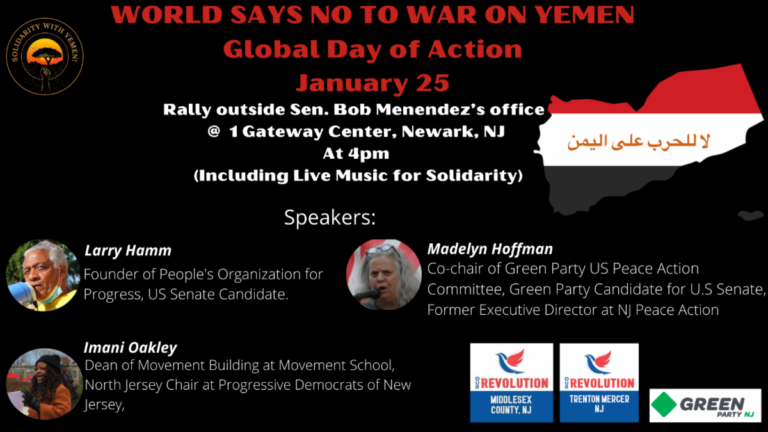 Rallying against the War on Yemen

The war in Yemen has created the worst humanitarian crisis in the world according to the UN. They estimate that more than 24 million people in the country, which was already one of the poorest on the planet prior to the war, will need humanitarian assistance in 2021.

The war is led by Saudi Arabia, with the involvement of the UAE, but it is backed by some key Western powers – the US, the UK, France, Spain, Italy and Canada. In particular, the US and the UK have maintained unquestioning support for Saudi Arabia since the war began and are both participants in the war. The disaster in Yemen is man-made. It is caused by the war and blockade. It can be ended.

This rally is timed to take place just days after the inauguration of Joe Biden, who has promised to end US support for the war. This is our one central aim – to hold him to his word and force fellow governments to follow suit.

We will rally in front Senator Menendez’s office. Sen. Menendez has called out and voted for ending U.S. support for the war in the past. (The War Powers Resolution bill was passed in the Senate and House with bi-partisan support but was vetoed against by President Trump). Now, as the incoming Chair of the Senate Foreign Affairs Committee, we are asking Sen. Menendez to take a leading role in seeing an end to all U.S. involvement in the conflict.

We ask that Senator Menendez:

-Co-sponsor and fast track the existing War Powers Resolution that calls for an end to U.S. support for the Saudi led coalition which include political, material and logistical support and ban weapons sales to Saudi Arabia and the United Arab Emirates.

-Introduce and fast track legislation restoring and expanding humanitarian aid for the people of Yemen.

-Pledge to reverse the decision by the Trump administration to designate Ansar Allah (also known as Houthis) as a “terrorist organization”. Designating the Houthis as terrorists by the US State Department will make an already catastrophic humanitarian crisis even worse by endangering aid activities and prohibit interacting with the Houthi government inside of Yemen which is critical to reach a negotiated settlement to end the war.