Skip to content
Home » Uncategorized » OPEN UP THE DEBATES!! 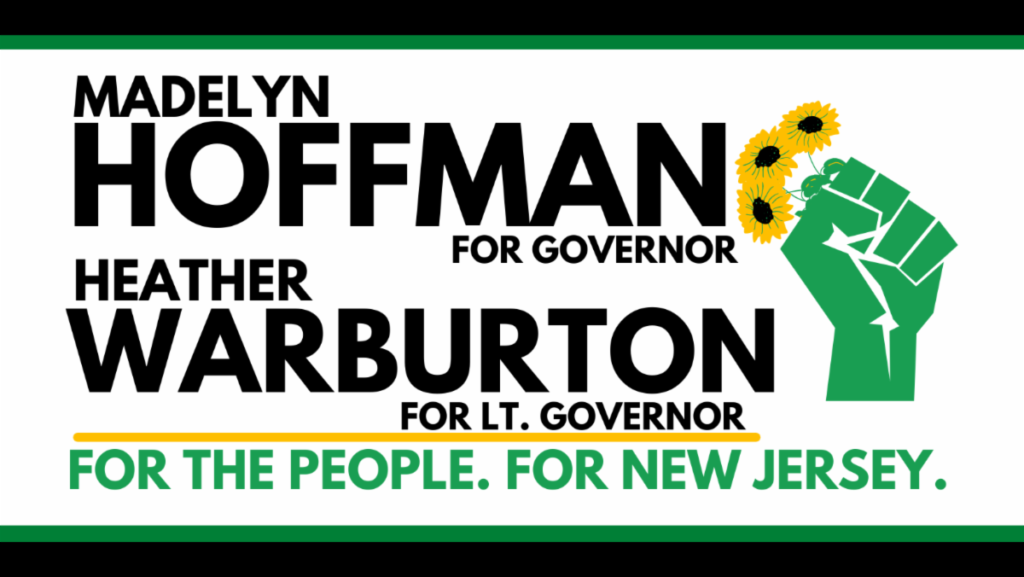 OPEN UP THE DEBATES!!

“Requiring that participants in the gubernatorial debates raise nearly half a million dollars creates the ‘best democracy money can buy.’” —  Madelyn Hoffman, NJ Green Party candidate for Governor in 2021

For more information contact:
Madelyn Hoffman at (973)876-1023 or hoffmanforgovernor2021@gmail.com
Dustin Young at (215)866-7343 or dgyoung2222@gmail.com
On August 18, 1920, just over 101 years ago, the 19th Amendment to the Constitution was ratified. It granted women the right to vote and came half a century after ratification of the 15th amendment granting formerly enslaved black men the right to vote. The intent of both amendments was to increase participation of groups formerly marginalized.
While some progress has been made as far as women’s and African-Americans’ participation in the political process since 1870, there have also been some setbacks and reasons for concern. Of particular concern is the lack of democracy in New Jersey’s political process.
I am running for governor of New Jersey with the Green Party of New Jersey in 2021. My first attempt to run for this political office was in 1997. It was difficult enough to qualify for participation in the debates then — it was necessary to raise $210,000 to qualify for the debates and to be considered a “serious” candidate. Here in 2021, that threshold has been raised to $490,000, almost half a million dollars. And that money must be raised by today, September 1st!
This is a travesty for a country whose political system is broken. When polled, a majority responds that they want to have another alternative to vote for, other than a Democrat or a Republican, even during this period of hyperpartisanship. A February 2021 Gallup Poll reveals that:
Americans’ desire for a third party has ticked up since last fall and now sits at a high in Gallup’s trend. Sixty-two percent of U.S. adults say the “parties do such a poor job representing the American people that a third party is needed,” an increase from 57% in September.
https://news.gallup.com/poll/329639/support-third-political-party-high-point.aspx
Despite these results, or maybe because of them, the political establishment in New Jersey is doing everything in its power to limit the voices that are heard. Requiring that participants in the gubernatorial debates raise nearly half a million dollars creates the “best democracy money can buy.”
The point of the 15th and 19th amendments was to level the playing field. The point of a more inclusive democracy is for more voices to be heard. In one on-line discussion with staff of the Republican candidate for governor, our campaign was said to be illegitimate because we weren’t able to raise $490,000. “Where was our support?” the staffer or volunteer continued.
Let me answer that question. The Hoffman for Governor campaign firmly believes that if we met the requirements to be on the ballot by submitting at least 800 valid signatures of registered voters, then we should automatically be allowed in the debates for the position we seek. For governor in 2021, that would mean a total of 5 candidates would be on the debate podium — Governor Murphy (D), Jack Ciaterrelli (R), Madelyn Hoffman (Green), Joanne Kuniansky (Socialist Workers), and Greg Mele (Libertarian).
It is not for the State Elections Commission or the media to determine who should participate in the debates and certainly, the amount of money raised should not be the deciding factor. This country is in dire need of a diversity of voices and opinions, instead of an ever-narrowing selection of voices and points of view. All ballot-qualified candidates should be invited to participate. In fact, the decision about the September 28th gubernatorial debate at the NJPAC in Newark was made before the State Elections Commission’s own deadline for raising that almost half a million dollars.
Especially at this time of year, the 101th anniversary of the ratification of the 19th amendment, we should not be continuing to squeeze out the voices of women — and, of course, men — who just aren’t able to raise half a million dollars!!! It must be that the Democrats and Republicans fear that independent voices will challenge the policies they make from their comfortable perches of answering to the monied interests, whether it be demanding a real Green New Deal or single-payer health care for all or the abolition of ICE, for example. That fear of independent voices should be reason enough to open up the debates!!