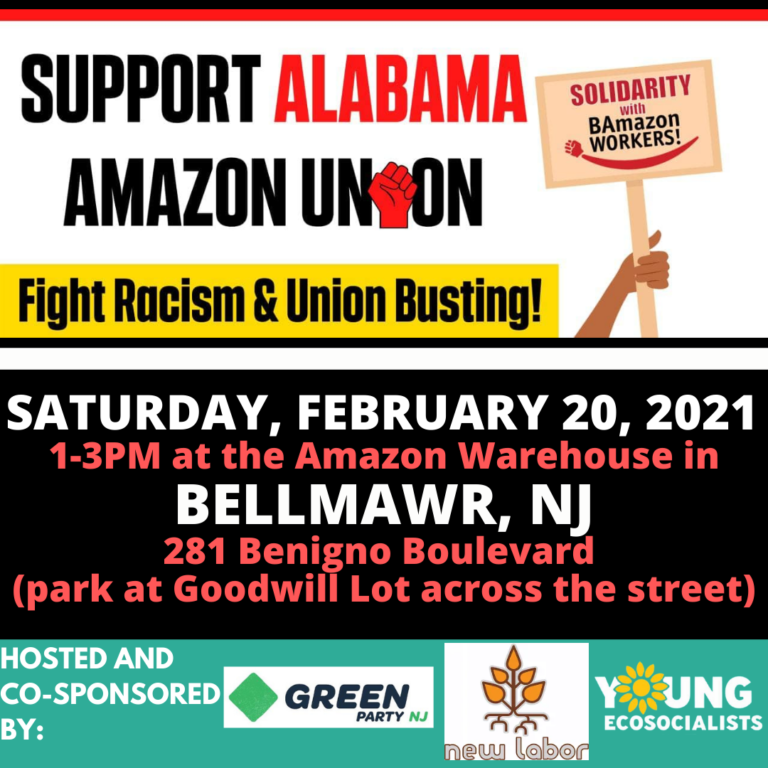 Local activists from across New Jersey stand in solidarity with Alabama Amazon Workers and workers everywhere! Activists will rally in front of the Bellmawr, New Jersey Amazon warehouse to show support to the Amazon workers in Bessemer, Alabama and workers everywhere. Bessemer, Alabama, sits on the outskirts of Birmingham and with a population of 26,500 — about 75% African American — has become a central focus for class struggle.

At the Bessemer Amazon warehouse thousands of workers are fighting for a union. Over Amazon’s strident objections, the National Labor Relations Board is conducting a union representation election by mail.  Not only is this African American majority workforce up against the world’s richest human, Amazon CEO Jeff Bezos, they are facing off with the second-largest company in the U.S. — and the ninth largest in the world.

Saturday is a national day of action led by the “Support Amazon Workers” campaign a coalition of workers, labor and community activists who see mobilizing solidarity as a critical task to ensure their victory. New Jersey activists will rally in front of the Amazon Warehouse located at 281 Benigno Boulevard in Bellmawr, Camden County, New Jersey, from 1:00pm until 3:00pm.

**This event will be outdoors and participants will keep social distance and wear masks (masks will be provided if needed). We will take measures to keep everyone safe!